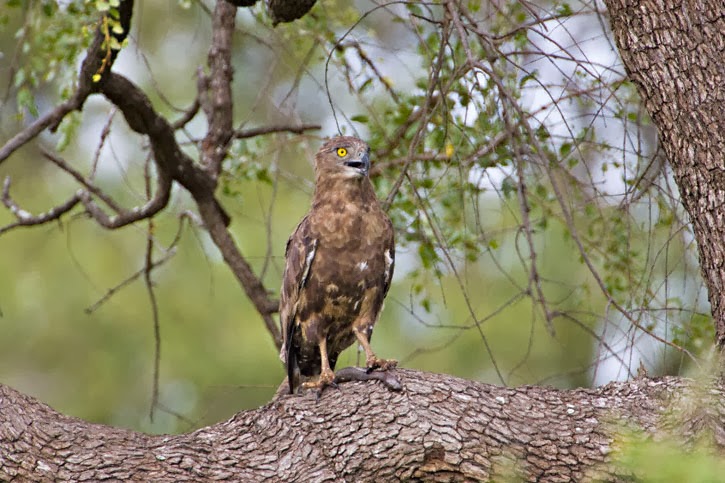 The Brown Snake Eagle is also known after the Latin name of Circaetus cinereus, and it is a part of the Accipitridae family. It is one of the largest eagles in Africa, and the largest snake eagle. It is spread in Southern Africa mainly, but also in other savannah areas.

The adults and babies are of the same color, but the babies might be of light brown, with some white feathers. However, the majority of them don’t have a single portion of the body covered in white.

The Brown Snake Eagle flies quietly and alone, and it rarely screams. Usually, it screams while flying, as a sign of domination. They like to stay on high rocks or pylons for hours. The average life duration is seven years, but they can live up to 10 or even 12 years.

With a length of 70-75 centimeters, and with a wingspan of 165 centimeters, the Brown Snake Eagle is one of the largest African eagles. They weight 1.5-2.5 kilograms at maturity.

The Brown Snake Eagle likes the desert and the arid open spaces, but they also need wooded areas around. However, they only like to hunt around those, not to stay there. They can’t be found in deforested areas.

The Brown Snake Eagle lives especially in Mauritania and Senegal, but also in South Africa. They also migrate North during the rainy season, just to come back during the summer.

Currently, it is estimated that 10 000 – 100 000 Brown Eagles exist in the world. It is not an endangered species, because it does not have many natural enemies, but this could change soon if the feeding habitats are affected by human actions.

As the name says, the Brown Snake Eagle usually eats snakes and other small reptiles, which can be found in abundance in Africa. They also hunt small mammals and smaller birds. They are not afraid of venomous snakes, because their legs are thick enough to resist to those attacks. However, the cobras can blind the brown eagle with its spit.

They have the same hunting method as other eagles, based on their capacity to see from the heights of the skies. They don’t like to eat while flying, so they will always take their prey on a rock or in a tree, where they can safely eat it.

A family of brown snake eagles covers a territory of 200 square kilometers. The male proves its worthiness in front of the female by driving and soaring. The female lays eggs once a year. For that, the pair builds a 60-70 centimeters nest, in trees or on high rocks. They also “steal” the nests of other birds, but they put their print on the nest with new leaves and branches. Usually, the female lays one egg. The incubation period is 50 days. The chick needs about 100 days to learn how to fly. The babies are fully independent from their parents a few weeks after fledging.

The Brown Eagles live in protected areas, and they are on the Least Concern List of BirdLife International, meaning that they are not endangered. They are also known as the Brown Harrier Eagle, or as the Ghama in Tsonga language.

The article was written according to the information taken from the following books: